NC NOW was well represented at the Veteran Feminists of America “Sharing Our Stories” event on 3/31/17.  NC NOW members from Raleigh, Durham, Charlotte, Fayetteville and the Triad area were honored. NOW was mentioned repeatedly by activists as where they learned the skills that helped them for the rest of their lives. The scholars and the historians talked about their research and discussed topics right along with the activists. It would be great to get some of their books for NC NOW’s office library.

Here are pictures of the keynote speaker, Dr. Nancy MacLean, and from the 3 panels. Dr. Maclean is a William H. Chafe Professor of History and Public Policy at Duke University.

Besides the NC residents and sheroes, attendees included the current Texas NOW President, 2 former NY NOW Presidents (one who lives in NC), and more. 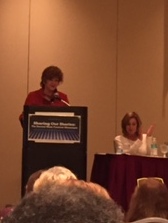 Speakers gave example after example of what it was like in the 60s and early 70s for women to have even a fraction of the rights we have now. For instance, landlords could refuse to rent property to women, could refuse to service women in bars, it was illegal to obtain birth control pills if unmarried, illegal to be gay and perfectly ok for a man to rape his wife. There were no little league teams for girls, no crisis centers, no shelters, no child care centers, no women’s studies. And, worst of all, gender discrimination was enforced by institutions.

The activists, who in that time period, had no email, cellphones-let alone, social media-did the hard work of going door to door, using rotary phones and talking one on one to people. They used personal stories directly with legislators to impact legislation such as support for childcare and violence against women. We encourage you to read and learn about the activism and work of these second wave feminists.

Panel One: Grassroots Organizing with our own Mandy Carter in the middle

Panel Two: Law And Government
The historians had written and were in the process of writing some really interesting books. University of Houston’s Leandra Zarnow, third from left, is writing “Passionate Politics: Bella Abzug and the Promise and Peril of the American Left,” forthcoming from Harvard University Press. This study of New York Representative Bella Abzug’s political ideology and legacy is at once a history of the varied development and impact of New Politics Democrats at the height of influence between 1968 and 1976. With Katherine Turk of the University of North Carolina, Zarnow is “A Past of Our Own: Writing Women into History,” an intellectual history of the field of women’s history. Zarnow’s solo second project, “In Defense of Citizenship: Women’s Legal Advocacy and the Development of Feminist Jurisprudence,” considers how women lawyers at the periphery of the legal profession crafted innovative rights arguments in areas of the law not typically seen as gendered such as immigration, criminal justice, and civil liberties.