The US Senate is going ahead with another terrible version of AHCA, the so called “American Health Care Act”, aka Trumpcare. The nonpartisan Congressional Budget Office (CBO) estimated that version would cause 23 million people to lose health care coverage and end protections for many. These are protections like forcing insurance companies to cover people with pre-existing conditions.  Multiple sources say the Senate plans to hold their vote before the July 4 recess.

“[T]he plan is opposed by experts across the ideological spectrum, as well as groups representing doctors, nurses, hospitals, cancer patients, heart-disease patients and many others.” according to “Uh oh, Health Care Edition,” 6/8/17, NYTimes.

Senate Majority Leader Mitch McConnell and other Republicans (completely shutting out Democrats and Independents) are planning to bring their health care bill to the floor before July 4 and there will be NO DEBATE, and NO AMENDMENTS ALLOWED. Also NO INPUT FROM THE MEDICAL COMMUNITY OR THE PUBLIC is allowed. This is outrageous and we need to let NC’s US Senators Burr and Tillis know that this is absolutely, totally unacceptable.

“By acting fast, [Senate Majority Leader Mitch] McConnell hopes to minimize the continuing and mounting evidence of sabotage as insurers file rates in places such as North Carolina and Pennsylvania that explicitly break out the specific impact of Trump’s sabotage,” as Andrew Slavitt says in ‘Sabotage, speed and secrecy in the Senate.'” Andrew M. “Andy” Slavitt is a former Acting Administrator of the Centers for Medicare and Medicaid Services, a position he held from March 2015 to January 2017.

Senators for NC – Burr and Tillis must be told again and again how bad this would be, and how they will be held accountable. We include a few ways to do this below. 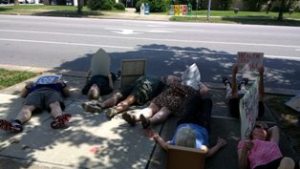 Above pictures are from the June 13 Tuesday with Tillis protest in Raleigh.
Photo Credit: Michael Eisenberg

The article continues, “McConnell deployed Rule XIV, a fast-track procedure that bypasses the committee process and moves the bill directly to the floor. Just as in the House, we’re on track to have a vote with no hearings (there were more than 100 for the ACA). Knowing the coverage loss will be significant, McConnell plans to vote within only days, or possibly even hours, of the release of the Congressional Budget Office score. “

Moving fast leaves opponents, and the public, with no time to catch up to the details. So start writing and start or continue protesting NOW! Please tell us of protests at other Burr and Tillis offices around NC, so NOW can share them.

By driving calls to the offices of Senators Tillis and Burr, we can show that North Carolinians are watching their secret bill-writing process and hold them accountable.

Use hashtags #keepNCcovered and #healthactionNC. Here are some sample tweets, from the Health Action NC coalition.