College women today still need to worry about major issues – safety on and off campus, being treated fairly, being paid fairly, health care coverage, and what happens when they decide to have children. Many don’t realize that the only right guaranteed for women in the Constitution is the right to vote. Even today.

We recognize the continued struggle for women to gain full constitutional inclusion in American society. We are sure that the fix for these and other problems is through the Equal Rights Amendment (ERA). We’re spreading the word about the problems that women face by bringing the documentary “Equal Means Equal” to the big screen at college campuses around NC from Sept 10-17. Look for your campus showing at http://www.nc4era.org/campus-movies-sept-10-17.html 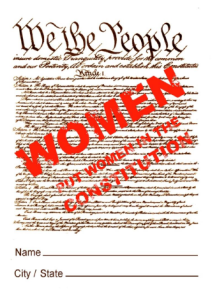 EQUAL MEANS EQUAL offers an unflinching look at how women are treated in the United States today. Covering workplace harassment, domestic violence, rape and sexual assault, healthcare, and the judicial system; the film makes a compelling and persuasive argument for the urgency of ratifying the Equal Rights Amendment.

Check the Campus4ERA site for date and time of showings at NCSU, UNC-CH, NCCU, UNC-W, Mars Hill. More schools may be added. If you don’t see your campus on the list yet, and want to help bring it there, email ‘info at nc4era.org’.

Campus4ERA is a developing movement that creates an intergenerational conversation between the activists that pushed for ratification in the 1970s and young feminists of today. ​

Campus 4 ERA is an affiliate of NC 4 ERA: A Project of NC NOW

One response to “EME making rounds at NC College Campuses in Sept. 2017”