It’s been another crazy week in the NCGA.  Here are some highlights (lowlights) from the North_Carolina_NOW_Legislative_Update_#4_Short_Session, 10_June_2018.

BUDGET
As expected, Governor Cooper vetoed the budget, citing inadequate funding for education and teacher pay raises, implementing unnecessary tax cuts, and the deplorable process used to pass the budget. See “Cooper vetoes budget bill — here’s why,” NC Policy Watch, 6/6/18. The Senate has voted to override the Governor’s veto and the House has voted once to override with a final vote scheduled for 06/12/2018. 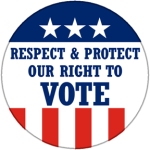 VOTER ID/STATE CONSTITUTIONAL AMENDMENT
A bill has been introduced to place a proposed amendment to the state constitution requiring photo ID for in-person voting on the November ballot. The language on the ballot will be general; however, the (presumed) Republican majority will write the actual bill. There is little reason to assume that any new bill will not be another unconstitutional measure aimed at voter suppression that will go far beyond voter ID alone. In short, the voters are being asked to approve a pig in a poke. It should be noted that voter ID is not required for absentee voting or early voting, which is technically a form of absentee voting. Republicans hope that this measure will appeal to their base and boost their turnout in an election in which they are expected to lose legislative seats.

ERA
On 5/30/2018 Illinois ratified the Equal Rights Amendment (ERA) becoming the 37th state to do so. Only one more state ratification is needed to amend the U. S. Constitution; however, before that can happen, Congress must pass legislation to rescind the time limit for ratification.

TAKE ACTION FOR THE ERA

Advocates are encouraged to contact the Rules Chairs in both chambers to lobby for a hearing on the ERA bills:

Find what to say and who to call (only 2 people) in the NC NOW Legislative Action at Take Action For The ERA in NC.

JUDICIAL REDISTRICTING
Judicial redistricting has been an ongoing battle because Republicans in the
House and Senate do not agree on what they want to do to stop judges from
overturning their unconstitutional actions. Rep. Justin Burr’s solution is to
gerrymander judicial districts to elect more conservative judges. His bill (H717)
passed the House last session, but stalled in the Senate because the Senate
wants to deal with the problem by getting rid of judicial elections and going to
an appointment process in which the legislature would play a major role—a
solution that would require an amendment to the state constitution.

See “We’re voting for judges this year, but are lawmakers done changing the rules for those elections?” News and Observer, 6/8/18.

More on Judicial Redistricting, ERA, and bills we are tracking at NC_NOW_Legislative_Update_#4 for the Short_Session, 10_June_2018