Thousands of marchers surrounded the NC Legislative Building while more waited and watched at Halifax Mall for the 2019 Raleigh Women’s March on Saturday, January 26, 2019. This is the third time women and allies showed up in the thousands in Raleigh to tell the world and the legislature that they are still fighting for change! Women organized women’s marches and rallies in at least 6 cities in January 2019. Here is a summary of the Raleigh event with theme, march, speakers, performers, signs.

Theme: Volunteers chose “Women United For Justice” because they want to work together for a more fair and reasonable state and country. This theme was chosen at two planning meetings in December. A march and rally were both scheduled, unlike 2018 when Raleigh had rally only.

March: People gathered at the front of the Legislative Building at 16 W. Jones St at 12:30pm. The permit had marchers stepping off at 1pm around the Legislative Building on the sidewalks (once or twice), then back to the front of the building, from where they could go close around the building to get to the Pedestrian Bridge that crosses to Halifax Mall.

There were so many women and allies all around the Legislative Building that there was confusion over where people were going, and some police officers routed people over the bridge without marching. Marshalls had chant sheets, and at least one head of the march had a loudspeaker, but people ended up going to the mall many different ways – some across the bridge, some from the Legislative Building side, and some went around Halifax Mall on the sidewalks, and entered Halifax at different points.

On the sidewalks (as on permit).

Speakers and performers: The Raleigh Women’s March scheduled 17 speakers and 7 performances in two hours, from 1:45pm to 3:45pm.

Here is a copy of the program with community partners on the back.

Our co-emcees were Ashley Popio and Mandy Carter. We had co-emcees for Facebook Live as well. They interviewed speakers and performers when they got off the stage. See pictures and some biographies of emcees and speakers on the Raleigh Women’s March page.

Signs and pictures: So many glorious signs were on display! Plus, here are links to signs and people pictures from professionals who volunteered.

Video and Photos by Susu – on Raleigh Women’s March page at https://www.raleighwomensmarch.org/gallery—photos-by-susu-hauser.html

Here are some of our pictures.

Volunteers: We couldn’t do anything without our volunteers.

Community Partners: This year as in years past, one of the goals was connecting people to organizations doing the work we need. 42 organizations had tables set up on one side of Halifax Mall, and over 50 community partners signed up to show support for this event. 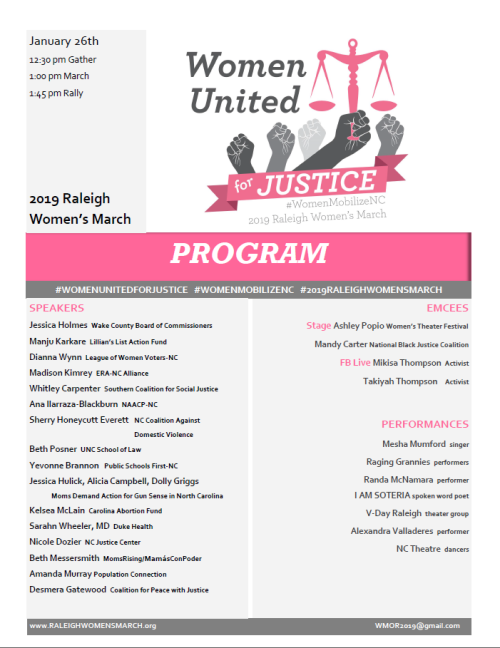 Media Coverage: See media coverage of Raleigh Women’s March at https://www.raleighwomensmarch.org/press-and-media.html. One of my favorite articles is “Women, men, march in Raleigh to show they’re not backing down,” 1/26/19, News and Observer.

“While the parade of families, college students and activists, colorful signs celebrating women, and dogs dressed in protest T-shirts and sandwich signs lightened the mood, those who came to march said they are determined.”

One thought on “Women and Allies Show Strength Again at Raleigh Women’s March on 1/26/19!”