“Abortion Is Healthcare” was the theme of the 125th week of rallies at Senator Thom Tillis’ office in Raleigh. This event included national, statewide and local updates on abortion and clinics access. Emcees and speakers included Gailya Paliga, President of NC NOW, Tara Romano, Executive Director of Naral Pro-choice North Carolina and Kelsea McLain, A Woman’s Choice of Raleigh. 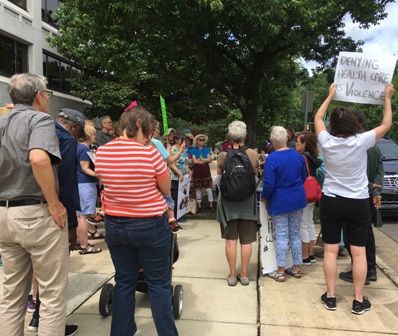 Abortion has been all over the news lately. Different types of abortion bans have become law recently in various states. In response,#stoptheban and other rallies popped up across North Carolina and the country in days.

Meanwhile, Missouri is trying hard to shut down the last clinic in Missouri. In fact, just last week, in the midst of the fight between the state and the last clinic, Missouri just added a punitive regulation requiring women seeking a legal abortion in the state to undergo a mandatory, medically unnecessary, invasive pelvic examination. Rachel Maddow broke the story, and  characterizes this as state-sanctioned sexual assault.

Topics were covered in this order:

Plus music, marching and a pop quiz on the Mueller report. It was a packed hour! See the Media Advisory: Abortion Is Healthcare Event on 6/11/19.

Read the revised letter that was sent to Senator Tillis’ office, talking about his part in the attacks on women and reproductive access..

These laws are designed to oppress and control women, and to threaten and intimidate doctors and medical staff. The goal is to overturn Roe v. Wade, using the new makeup of the US Supreme Court with the addition of Brett Kavanaugh and Neil Gorsuch.

Alabama’s abortion ban law is the most extreme – it bans virtually all abortions, with no exceptions for rape and incest. The Alabama law targets doctors by making performing an abortion a felony punishable by up to 99 years imprisonment!!

The abortion bans fall into categories, and bill templates are generally being forwarded by anti-abortion organizations.

NC’s own – pro-birth set lost one case in nc, and failed to override the Governor’s veto on another

1. The NC Legislature lost their case in court on 20 week ban

A 20 week ban law that North Carolina lawmakers had changed was struck down as unconstitutional by a federal judge on 3/26/19 (CNN.com).

“A law making it harder for women in North Carolina to get an abortion after 20 weeks is unconstitutional, a federal judge has declared. ” (3/27/19, NPR.org)

(The NPR article continues..) The law, which had been on the books since 1973, banned abortion after 20 weeks with only certain exceptions to protect the life of the mother. A 2015 amendment tightened those exceptions, criminalizing abortion unless the woman’s life or a “major bodily function” were at immediate risk. Pro-abortion rights groups challenged the law, and on Monday U.S. District Judge William Osteen sided with them.

Note also –doctors would have to wait until woman doing really badly to get it out, further threatening the woman’s health.

2. NC is one of the few states to stop an abortion ban.

After the vote being scheduled 11 times and cancelled 10 times, the House voted to uphold Governor Cooper’s veto of SB359, Abortion Survivors Protection Act. Republicans needed 72 votes to override the veto and fell five votes short. It was mainly a party-line vote with only two Democrats voting with the Republicans. And there was much rejoicing.

We need to mention the latest development this week in Missouri – regulatory harassment. Some background: Missouri has been trying to close their last clinic, which is in St. Louis. That fight has been playing out in court. DHSS (Health and Senior Services) claims problems in the clinic and tried to interview staff. The state health department in May declined to renew the clinic’s license to perform abortion procedures, citing concerns about patient safety, “failed surgical abortions” and legal violations. The clinic says no way. The clinic would have been closed in June, except a judge ruled to keep it open while the situation plays out.

There have been unnecessary regulations put on abortion clinics for decades, called TRAP laws (targeted regulation of abortion providers). Terrible practice. And state sponsored wording has been forced on doctors and clinics. Sometimes these are overturned in court. Well, Missouri has taken these regulations to a new level.

TRAP laws closed 4 of Missouri’s clinics in the past years. However, just last week, in the midst of the fight between the state and the last clinic, Missouri added a punitive regulation requiring women seeking a legal abortion in the state to undergo a mandatory, medically unnecessary, invasive pelvic examination. Rachel Maddow broke the story, and  characterizes this as state-sanctioned sexual assault. My friend Kathy Spillar from Feminist Majority Foundation called this regulatory harassment. It is, and TRAP laws are too.

5. What one woman can do

Kelsea spoke of how her own abortion made her into a passionate activist for other women. She organizes escorts, works at A Women’s Clinic of Raleigh, and is on the board of the Carolina Abortion Fund, an organization which runs a helpline 24/7 and raises money to help women get abortions. Kelsea also organized the 5/26/19 event in Raleigh that had around 300 attendees, and many speakers, including someone from NC NOW, Naral Pro-Choice NC, ACLU-NC, A Woman’s Choice of Raleigh, El Pueblo, Planned Parenthood, and more.

6. The Letter to Senator Tillis

June 11th, 2019 marked the 125th week of rallies at Senator Thom Tillis’ office in Raleigh. Every week, at least one letter is sent to his office related to the theme of the rally. Some weeks two are sent, for example if two topics are covered. This week there were two topics – abortion is healthcare, and the Mueller Report – so two letters were sent.

This is the revised letter that was sent to Senator Tillis’ office, talking about his part in the attacks on women and reproductive access.

Our ask of Senator Tillis is

“to support women and their right to control their own bodies, to have or not have children, to safe childbirth (women of color are about three times more likely to die from pregnancy-related issues than white women) and to vote against the bans on abortion and other abortion and birth control restrictions.”