Paliga: Trump is Terrible for Women

NC NOW’s president gave a speech on how Terrible Trump has been for women at a rally in Raleigh on 6/15/19.

Ralliers on this corner and across New Bern as well. Photo Credit: Jacalyn Engler

I know Trump does bad things so quickly it’s hard to follow them all, but even back at the first 100 day mark he was a disaster.

He hates women – from his taped “grab them by the [genitals]” comment to his twitter bashing of former beauty queen Alicia Machado (9/30/16) https://www.politico.com/story/2016/09/trump-attack-alicia-machado-miss-universe-228910  Trump’s buddies piled on to this attack – with Newt Gingrich shaming her for gaining weight during her reign and Corey Lewandowski chiming in on something else.

Trump showed himself before the election: a man who insults women, minorities and disabled people while never apologizing, is temperamentally unfit for political office, much less the Oval Office.

That has been proven true. Problem is the Trump administration has done an impressive amount of damage – including for women.

Trump completely failed women in his first 100 days, on everything from choosing a new Supreme Court judge to slashing global health funding. The first SCOTUS judge was Neil Gorsuch https://www.nbcnews.com/news/nbcblk/opinion-neil-gorsuch-s-frightening-record-protecting-women-s-rights-n739746  Gorsuch already had a frightening record – showing his hate for Planned Parenthood, and his love for corporations refusing to pay for Birth Control for women!! That is what the Hobby Lobby case was about, and why I won’t shop there.

Trump didn’t just reinstate a global gag rule – he created a global gag rule on steroids, widely expanding the reach of the Global Gag Rule. Under the Reagan and Bush administrations, the ban applied to $60 million in programming. But the Trump Administration decided to apply the policy to a total of $8.8 billion in existing foreign aid provided by the State Department, USAid, and the Department of Defense.

We were not expecting Trump in office at all, but got plenty of warning how terrible he would be from his campaign behavior. Inciting violence at rallies. Belittling his competition. Stalking Hillary Clinton on stage. But also we were always expecting Congress to do its job with checks and balances, and they have not. Neither House nor Senate was doing their job through the 2018 elections. Since then, the US Senate continues to refuse to live up to its responsibilities of keeping an out of control president in check. Thanks to the 2018 elections, the House is doing hearings – to get the facts out to those who don’t normally pay attention. Which I fear is most people.

We could be here all day talking about damage. I will list a few of the worst attacks on women.

Need to be mentioned because they are so significant.

ACA has become the law of the land – and people forget or may not realize how bad it was before President Obama. One of biggest benefits for all was removing preexisting conditions as excuse to not cover patients. But other one was that women and seniors were charged much much more than men for coverage. Charging women more is called Gender Rating. Yes, there is even a term for this unfairness.

Gender Rating. Before the ACA, women buying insurance on the individual market were routinely charged up to 50 percent more for monthly premiums than men. In some cases the gap was as high as 81 percent.

If the Trump administration should strike down the ACA, that would affect the most vulnerable, including women, children, seniors, people with low incomes and individuals with disabilities. How will pregnant women afford the necessary prenatal and maternity care, currently considered an essential benefit under the ACA, if they lose coverage? At a time when the maternal mortality rate in the United States is worse than it was in the 1990s, it is unconscionable that we would further limit access to this care. https://www.usatoday.com/story/opinion/2019/03/26/trump-administration-attack-health-care-hurts-us-talker/3276387002/

2. Going after Planned Parenthood and all the good it provides

Thanks to Obamcare, Planned Parenthood treats thousands of patients who have never before been able to access cancer screenings, HIV tests, or treatment for diabetes and other chronic conditions. Nearly 63 million people have gained access to preventive services such as no-cost birth control, well-woman visits, domestic violence screenings, and sexually transmitted disease and HIV screenings thanks to the ACA. – https://www.usatoday.com/story/opinion/2019/03/26/trump-administration-attack-health-care-hurts-us-talker/3276387002/

And speaking of which, Planned Parenthood, which provides an array of reproductive health services using federal funds — and abortions, using non-federal funds — serves 2.8 million in the U.S. annually.  In fact, more than 4.6 million Americans rely on affordable family planning services through Title X — and about 1.5 million of them get their care at Planned Parenthood health centers.

The new rule, proposed last week, rolls back protections instituted by the Obama administration, which in 2016 released rules barring health care workers and insurance companies from discriminating against patients on the basis of gender identity. By getting rid of those protections, the Trump administration rule would allow doctors to refuse to provide transition-related care — or to refuse to see transgender patients at all, even for routine care like flu shots.

The push for equal pay hasn’t budged in the age of Trump.

A recent Reuters report suggested the pay gap is now worse, with women making roughly half the income of men in a 15-year period, accounting for time off for family care.

The administration is pushing a bill to allow six weeks of paid leave, as opposed to the 12 weeks of unpaid leave currently mandated by the Family and Medical Leave Act of 1993.

The bill has stalled, and it’s unlikely it’ll pass the Democratic-controlled House of Representatives.

This is another area that has terrible long term ramifications for the country, and for women and families.

With the machinations of Mitch McConnell, President Obama’s centrist pick for Supreme Court never got a hearing, and two extremist nominations from Trump were both seated on the Supreme Court. Mentioned Gorsuch in first 100 days. Then in Fall of 2018 – Brett Kavanaugh’s sketchy past and temperament were exposed.

Trump and the US Senate have installed a record number of federal appeals court judges during Trump’s first two years in office. At this point, trump will soon “have appointed nearly one-fifth of all circuit court seats in the country.” (https://www.newsweek.com/donald-trump-judges-circuit-court-1353506)

“Now, Republicans are devising a plan to make judicial appointments move much faster than before by decreasing the amount of debate time on nominees. Democrats can opt to debate for 30 hours, but if Republicans change the rules that time would be reduced to two hours.”

(Much more – the trump administration 2019 budget is a disaster for women and families. I didn’t include all that.)

Looking for the Good News in this

Women have stepped up .

A record number of women ran — and got elected — in the 2018 midterms and state elections.

Women’s marches, women in activist groups – existing ones and new ones that popped up in response

A woman, Nancy Pelosi, is again Speaker of the House of Representatives, making her third in line for the presidency.

She’s a strong woman with a plan

I have hope in us!

And that the Republicans or SCOTUS will reach a breaking point and have to step in and avert  impending disaster. 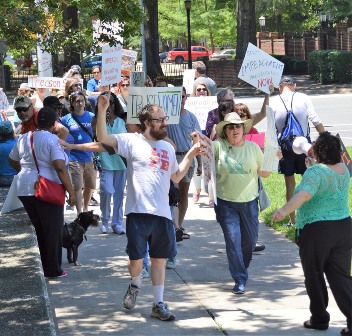