Rep.  Butler gained national attention for her impassioned rebuke of House Speaker  Tim Moore after he called for a vote on Governor Cooper’s veto of the state budget during a session that Democrats and the media had been told would be a non-voting session.  Republican representatives, by contrast, had been told to “be in your seats.” 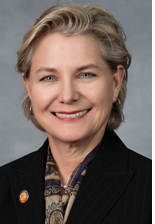 When the vote was called, there were 9 Democrats and 55 Republicans present in the chamber.   Rep. Butler quickly rose to speak, but the Speaker would not recognize her.  She spoke out anyway.  The Sergeant at Arms took away her microphone and the speaker cut off her mike, but she picked up another mike.

No media was present in the chamber since they, too, had been told there would be no votes in the morning session and the drama began shortly after 8:30 a.m, But a colleague (Rep. John Autry, D-Mecklenburg) had the presence of mind to capture the events  on his cell phone camera as they unfolded.

The Speaker asked her to yield and she shouted, “Mr. Speaker, I  will not yield!” and she repeated that mantra over and over again whenever he tried to stop her.

The Speaker summoned the Capital Police, but her Democratic colleagues surrounded her, literally had her back, and prevented them from reaching her.  This went on for nearly ten minutes.

One of the best interviews was with Lawrence O’Donnell on MSNBC.(https://www.youtube.com/watch?v=SlhOI_ArLh4 ).

Deb Butler is a Wilmington attorney who was appointed to the General Assembly in 2017 to complete Representative Susi Hamilton’s term after Hamilton was appointed Secretary of Natural and Cultural Resources.  She won re-election in 2018 and was endorsed by the North Carolina NOW Political Action Committee (NC NOW PAC).

As a legislator she focused mainly on environmental issues because in 2017 it was revealed that Wilmington’s drinking water was contaminated with toxic chemicals dumped into the Cape Fear River by the Chemours chemical plant located upstream near Fayetteville. The Democratic leadership recognized her talents and made her a Whip, a leader responsible for counting votes on issues of concern to the party.

Representative Butler has served on the Board of Directors of Equality NC and is the third out lesbian to serve in the N. C. General Assembly.  She is also one of the co-sponsors of the NC Ratify ERA bill in 2019.  She is a dynamic speaker. Don’t miss the opportunity to hear her keynote the 2019 North Carolina NOW Conference in Charlotte on November 9, 2019!

Update: Chemours pollution found to be even worse than known. According to “NC State-led study shows Cape Fear River had ‘incredibly high’ levels of chemicals,” 10/10/19, News and Observer,

“A new study from N.C. State University has revealed that the levels of chemicals discharged by DuPont and Chemours into the Cape Fear River were significantly higher than previously believed and that the chemicals will not degrade in the natural environment.”

In 2017, Rep. Butler felt she had been excluded from environmental committees addressing the contamination of the Cape Fear River by GenX and other chemicals. According to a Star News Online article, 9/18/17,

“Rep. Deb Butler has three times asked N.C. House Speaker Tim Moore to place her on environmental committees addressing the contamination of the Cape Fear River by GenX and other chemicals.”