The 2019 State Conference in Charlotte on 11/9/19 included new topics, an exciting keynote, diverse attendees and many first timers. We had members and attendees from 18 to 80 and Rep. Deb Butler’s speech was a highlight for all! Our conference theme was “The Time For Justice Is NOW.” NOW covers all issues affecting women, but we delved into a few new areas for NC NOW – how climate change hurts women and gender equity.  NC NOW officers were elected, an annual task. We also hosted a panel on threats to reproductive access, an update on the Violence Against Women Act (VAWA), six workshops and more. We were honored to include a tribute to long time feminist activist and NC NOW board member Jan Allen. 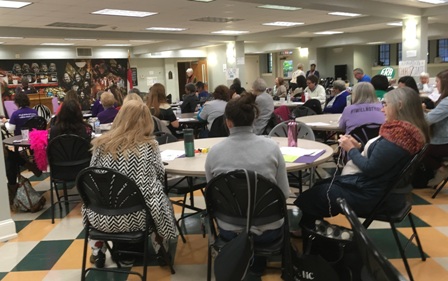 Conference view from the back. Photo Credit: Gailya Paliga

Rep. Deb Butler was an exciting keynote speaker. She inspired us with her strong responses to underhanded tricks from the House leadership and visibility since then. Charlotte NOW brought a lot to the planning by expanding workshop topics (climate change, gender equity, immigration stories), using and sharing some online and googledocs skills, sharing fun activity ideas (like open mic event on Friday evening) and community connections. Durham NOW ran the silent auction – 4 tables of unique and interesting (and sometimes tasty) items, Carrol Olinger put together multiple baskets of treats. Fayetteville NOW did registration and credentialing, and helped with organizing and getting packets copied and together and more. Triad NOW organized and helped keep things moving on Friday night at the Open Mic event. Raleigh NOW helped with carpools and organizing input. Exit surveys showed much enthusiasm about Rep Butler as a ‘vibrant’ keynote speaker, appreciation of different workshops, the surprise treat of Triad NOW president Ana Tampanna’s personal story. Others enjoyed the panel on threats to reproductive rights. Very sobering. The update on VAWA was appreciated as well, we must get that reauthorized!

Rep Deb Butler’s speech was titled “Four Little Words.” She is an inspiration in many ways – including her work in the legislature, and the outrage she expressed with the stunt that the NC House leadership pulled on 9/11. The outrage connected with a wider political frustration many people have with the legislature.

The conference included two sets of three workshops – so six workshops altogether. Find the workshop descriptions here. The most popular workshops were the Immigration Stories workshop in the afternoon, and the Climate Change hurting women workshop in the morning. Other hot topics were using googledocs, lobbying, a gender equity panel of speakers. The History of NOW attracted many people – some new to NOW, some with decades of experience with NOW! We are already making plans for 2 levels of using googledocs workshops for next year.

Triad NOW President Ana Tampana telling a personal story about volunteering for organizations that help women in crisis and what happened with a specific case. Photo credit: Gailya Paliga

Charlotte NOW did a wonderful job helping to organize the conference, and had a great turnout. Here are some Charlotte NOW officers with Rep. Deb Butler. 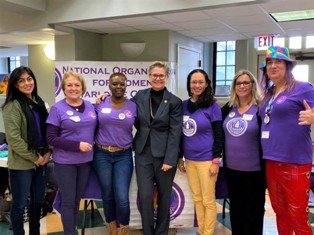 We had 12 tables and one exhibit signed up for the conference. The exhibits was created by an artist and titled “Airing Our Dirty Laundry.” It consisted of articles of clothing with messages to children and one’s child self…all hanging on a line. 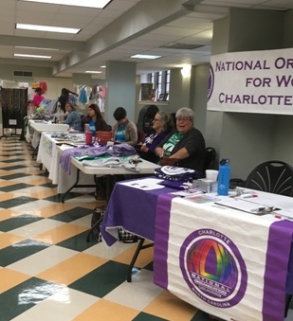 Tables down one side with Airing Dirty Laundry exhibit at back Photo credit: Gailya Paliga 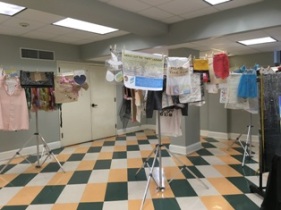 Other tables and the silent auction items were on the other side of the excellent large room we had.