This year’s upcoming election may be the most important one in American history. America’s future hinges on its outcome. It is incumbent on all citizens to not only vote for their preferred presidential candidate, but also to choose among contenders seeking other elected offices.  We are all Voting Our Future NOW!

Here are shortcuts to registration and sponsorship.

Note: There are 2 steps to online registration – step 1 is to register online and sign up for workshops (first come first serve). Step 2 is to pay – either online or by printing and mailing in the 2020 NC NOW State Conference Registration and Sponsorship Form (so you register online and can order t-shirts, etc, but can mail your check in or make other arrangements). 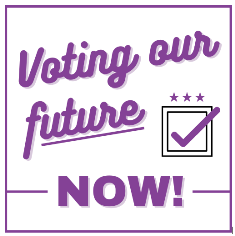 Donald Trump’s incessant callousness, unrelenting recklessness, false statements, incendiary rhetoric, and non existent leadership have caused confusion and increased our societies polarization which, along with the COVID-19 pandemic, have placed the nation at a tipping point not experienced since the Great Depression. Trump’s behavior is supported by a number of other elected officials.

NC NOW’s annual conference is in October and we plan to encourage you to vote and give you some tools.  We’ll provide NC NOW PAC endorsements as guidance and let you hear from some endorsed candidates. We have panels on some big topics of the day – more reason for you to vote. The NC NOW State conference begins the evening of Friday, Oct 9 and continues the morning through 1pm of Saturday, Oct 10.  Please join us for an excellent program. We’ll be on Zoom to make sure everyone stays safe.

2. Dr. Valerie Johnson is speaking about Racial Injustice in the Justice System for Women on Friday evening, Oct 9.  Dr. Johnson is co-interim director for the new “Center for Racial and Social Justice” at Shaw University in Raleigh. She also serves as Shaw’s Dean of the School of Arts, Science and Humanities and as a Professor of Sociology. Article on her at https://wp.me/p22b2e-2R9

3. We’re having a panel on how the military #MeToo movement can improve handling of sex crimes at Fort Bragg and Fayetteville. Lots of problems with handling of sexual assault and sexual harassment in the military as you may have heard (#VanessaGuillen), and NC NOW is involved and in touch in Fayetteville. Panelists are Deanne Gerdes, Executive Director of Rape Crisis of Cumberland County, and Captain Erin Scanlon (retired), advocate for rape survivors. This will be moderated by NC NOW President, Gailya Paliga.

4. We have great workshops planned, including

These will be after the keynote on Saturday, October 10.

Mail in registration: Use NC NOW State Conference Registration for 2020

Online registration: There are 2 steps to this – part 1 is to register online and sign up for workshops (first come first serve). Part 2 is to pay – either online or by printing and mailing in the 2020 NC NOW State Conference Registration and Sponsorship Form (so you register online and can order t-shirts, etc, but can mail your check in or make other arrangements).  Note: Attending for NOW members can be free.

2014 – The Future of Feminism: Forward Together! with Georgia NOW in Atlanta, GA – keynote Patricia Ireland, past president of the National Organization for Women, and labor rights lawyer.