There are significant differences between white supremacy and white nationalism. Even some reporters, including from CNN and Fox News, seem to be confused between the two. These terms are being used sometimes interchangeably with regard to the many senseless massacres in the US, including the El Paso TX and Dayton OH massacres that happened the same weekend in August 2019. But white supremacy and white nationalism are not the same, and the distinctions are important.

END_OF_DOCUMENT_TOKEN_TO_BE_REPLACED

Update on situation with Rep. Cody Henson (R-Transylvania). The restraining order against Henson, and the trouble Henson’s now estranged wife had getting it in small town North Carolina, were the impetus for a Town Hall in Brevard last February and another Town Hall in Winston-Salem in April. Henson was in the news in June 2019, for missing court, but the bigger news hit on July 23, when he finally made it to court (after yet another postponement). Henson actually pleaded guilty to cyberstalking his estranged wife, and he resigned the next day. 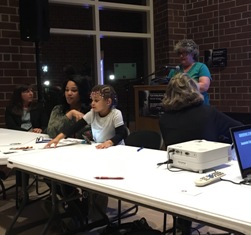