Event Summary: Many Issues with State Budget, Not Medicaid Alone

A coalition of organizations held a community conversations event “Public Education, Medicaid Expansion and the State Budget” in Fayetteville on Thursday, 7/25/19. Attendees heard from many very well qualified speakers on two panels – the first panel included community leaders, doctors, patients on need for Medicaid Expansion and returning public education to place of importance in state,  and the second panel included  some history of Medicaid expansion in NC and current shenanigans and chances with past and present lawmakers. 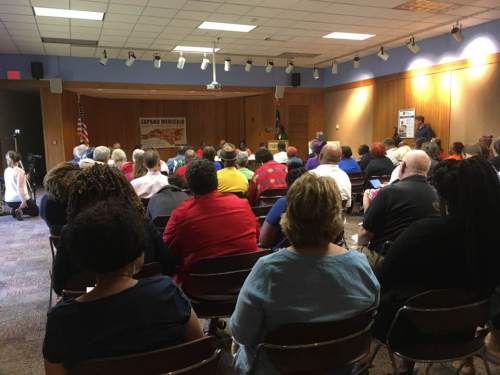 END_OF_DOCUMENT_TOKEN_TO_BE_REPLACED

The biggest event this week was the march and rally held by teachers and their supporters on May 1.  The march was in support of better funding for our schools, better pay for teachers and other school personnel, and expansion of Medicaid funding since children without adequate medical care cannot learn.  Marchers wore red for ed!  For a more detailed account, see:  https://www.charlotteobserver.com/news/politics-government/article229849024.html

The House passed its budget, which does not include funding for Medicaid expansion, and has sent it on to the Senate.

END_OF_DOCUMENT_TOKEN_TO_BE_REPLACED

Even just the titles of the listed articles give you an idea how terrible this state budget is. This is the state budget for which the NCGA leadership subverted the process so there can be no amendments or discussion on it. NC NOW Vice President of Legislation Robin Davis described how this was done and why  in the NC NOW Legislative Update for the Short Session #2. When she wrote it, most people, including Democratic lawmakers, had not even seen the budget yet! Now more people have seen it and many are angry and upset! These articles explain a few of the major issues being discovered in this budget that was written behind closed doors, and delve in if you dare!

There have been some amazingly scathing articles on the legislative leadership (Senator Phil Berger & Rep. Tim Moore) circumventing the normal budget process. Berger and Moore and their buddies are shutting out the voices of citizens and other lawmakers. Here are 2 of my favorites. 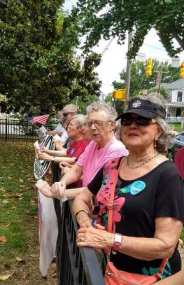 END_OF_DOCUMENT_TOKEN_TO_BE_REPLACED

NC Teachers show up as a sea of red for ed to greet the NCGA’s return for the “short session.” 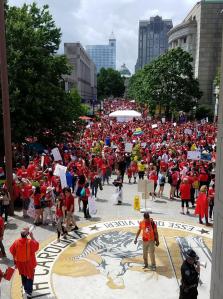 On opening day between 20,000 and 30,000 teachers from all across the state marched and rallied in Raleigh in support of higher pay for teachers and more funding for schools.  Many took the opportunity to visit their representatives to explain that over the past 10 years teacher pay and per capita spending for students has actually declined when adjusted for inflation.

END_OF_DOCUMENT_TOKEN_TO_BE_REPLACED

The latest school massacre, which was in Parkland Florida on Valentines Day (2/14/18), may have more of a lasting impact that previous ones. The teen survivors are calling out the blame mongering and refusal of Congress and Trump to do their jobs in protecting children and teachers – and making a concerted effort to pull in others through social media. And they are not putting on a polite front in their speeches or in interviews. For example, teen survivor Emma Gonzalez gave an amazing, heartfelt, passionate speech calling out President Trump, the GOP, and the NRA for enabling the murder of children at an anti-gun rally.

“How about we stop blaming the victims for something that was the shooter’s fault?” [Emma Gonzalez] demanded, and called out those who do deserve to shoulder that blame.

END_OF_DOCUMENT_TOKEN_TO_BE_REPLACED

A budget has passed and has gone to the Governor, who has ten days to sign it, veto it, or allow it to become law without his signature. Governor Cooper is expected to veto the budget since he has been strongly critical of it: http://www.wral.com/cooper-calls-budget-deal-irresponsible-/16774013/, 6/20/17. But if the budget is vetoed, expect an override since Republicans hold veto-proof majorities in both the House and Senate.

The budget intensifies the attack on women’s reproductive rights by appropriating $2.6 million to crisis pregnancy centers (CPCs) over a two-year period. So-called crisis pregnancy centers are religious “ministries” that attempt to persuade women wanting abortions not to have them, often using scare tactics and false information such as claiming that having an abortion will leave a woman sterile or put her at risk for cancer. This appropriation represents an increase of one million dollars per year. See: https://www.indyweek.com/news/archives/2017/06/20/ncga-budget-gives-26-million-to-crisis-pregnancy-centers, 6/20/17. 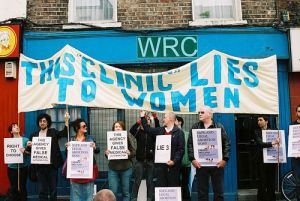 END_OF_DOCUMENT_TOKEN_TO_BE_REPLACED

I am outraged that Senators Burr and Tillis’ votes for Education Secretary nominee Betsy DeVos have thrown North Carolina’s children under the bus – the school bus. Senator Tillis even served as PTA President for his daughter’s High School, but that didn’t stop him from putting in office an unqualified – but filthy rich – nominee who many believe is hostile to public education. And let it be made clear this is not proof of supporting women in leadership – both Tillis and Burr have blocked well qualified African-American nominees like Loretta Lynch, Jennifer May Parker and Patricia Timmons-Goodsen.

DeVos has no personal experience in public education, not as student, parent, teacher or administration. In fact, she has worked to undermine public education, spending more than two decades promoting taxpayer-subsidized vouchers for private and parochial school tuition and promoting publicly funded but privately run charter schools. She also tried to strip teacher unions of their influence.

END_OF_DOCUMENT_TOKEN_TO_BE_REPLACED

Posted on October 19, 2016 | Leave a comment
I am inspired by some of President Obama’s speeches, but appalled at his Operation Border Guardian which directs Immigration and Customs Enforcement (ICE) to take children (18 years old) and throw them in jails, sometimes private jails (even worse). In implementation, ICE is grabbing these teenagers on their way to school, off school buses, and out of stairwells at school – cases of these known in Wake and Durham counties. Our state conference included a workshop on what it took a Durham school community to save (or at least give a chance to) teenager Wildin Acosta (also one on racism). Read about the community effort at “In Defense Of Wildin Acosta,“9/26/16, northcarolinanow.org.

We cover more about what is being done to these teens at “One saved, one lost of the NC 6 plus more,“9/26/16, northcarolinanow.org. The most heinous case I know came out of Durham County (probably because the Durham Community is fighting this). Here are some of the Durhamites fighting this!

END_OF_DOCUMENT_TOKEN_TO_BE_REPLACED

There is a lot going on with the fallout from the law known as HB 2 continuing to batter NC, the second primary that was Jun 7, the NCGA trying to change so much during the short session, protests at the legislature, continued stonewalling of African American women for federal positions (by Senator Richard Burr), teachers in the streets! Read about some of it in the NC NOW newsletter May-June 2016. 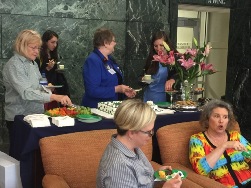 The newsletter mentions to tragic mass shooting that happened at a gay nightclub at 2am on June 12, 2016, in Orlando, FL. A gunman “carried out the worst mass shooting in United States history, leaving 50 people dead and 53 wounded.” It does not include the Charleston 9 hate crime shooting that was the following week (after the newsletter was published). On Jun 18, 2016, nine people were murdered at a historic African-American Church in Charleston, South Carolina, where they were doing bible study. The victims included the female pastor and a Democratic Senator, also female. These two hate crimes happened within a week of each other, both in the Southeastern US.

Also read about how you can get involved. Note that chapter meetings are listed on front page of the newsletter.

Special treat: the Wisdom from the Internet on page 5.

Give teacher raises with one hand, but with the other hand..

The Senate and House Budgets both give teachers modest pay raises, but continue to ignore most other school staff. Instead of hiring back the over 3000 TAs they forced schools to drop in 2013, they are proposing ways to ‘help’ after a problem has been manifested with “literacy coaches.” More at “Proposed House education budget cuts $27 million for reducing first-grade class sizes, reallocates most to literacy coaches.”  At the same time, the NCGA plans to take even more money from public education.