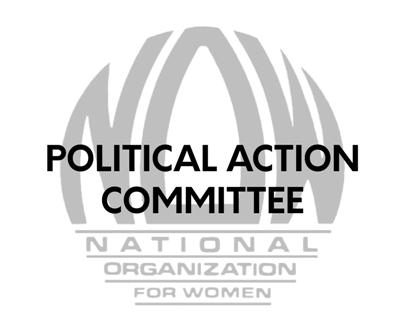 NC NOW announces the NC National Organization for Women Political Action Committee (NC NOW PAC) endorsements for statewide offices in the 2020 General Election, and also federal NOW PAC’s endorsements in Congress and for president and vice president. We are excited to announce our support for candidates who have demonstrated a true commitment to women through their words and/or actions. We show the PAC Endorsements on one page. They include 84 statewide endorsements from and 9 federal ones. Use your sample ballot and local resources to make decisions in local races. Here is How to Find Your Sample Ballot in NC.

Earlier this year, NC NOW announced NC NOW PAC endorsements for Council of State, NC NOW PAC candidate endorsements for the N.C. Supreme Court, N.C. Court of Appeals, and both chambers of the N.C. General Assembly. The national NOW PAC has endorsed 9 federal candidates for Congressional races. NOW PAC was proud and excited to announce its endorsement of Joe Biden and Kamala Harris for president and vice president of the United States of America. See those posts if you would like to see pictures or more information. 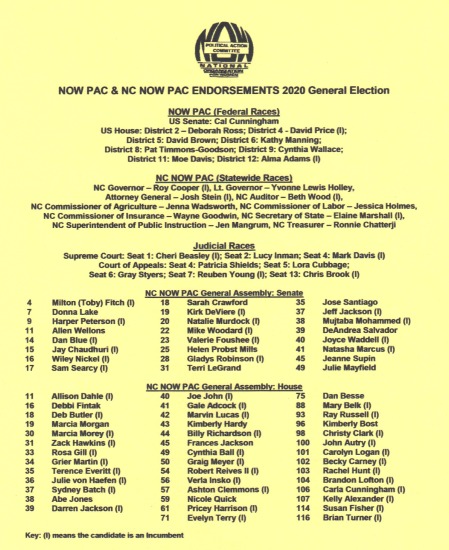 To print your own in black and white, use the file at postcard20.general.front.

Many changes in 2020 show voting improvements, especially in the way that Absentee ballots can be used during the pandemic.

Only one witness and no notaries are required for this election. More at “North Carolina Gov. Cooper signs law making mail-in absentee ballots easier, elections safer because of COVID-19,” 6/12/20, WXII12.

Absentee ballots can be tracked as of Sept 2020. More at “Can’t wait to vote? Getting an absentee ballot just got a whole lot easier.” 9/2/20, NC Policy Watch.

Voters will have a chance to fix Absentee ballots that were filled in incorrectly. More at “North Carolina board agrees to more absentee ballot changes, 9/22/20, Associated Press.

These changes are still so necessary, and should not be limited to voting during a pandemic – “Black voters were more than twice as likely to have mail-in ballots rejected than those submitted by the state’s white voters in 2018, and rejection rates for 2020 show a similar pattern, according to a new analysis by ProPublica and WRAL News.” More at “In North Carolina, Black Voters’ Mail-In Ballots Much More Likely to Be Rejected Than Those From Any Other Race,” 9/23/20, ProPublica.