Here are the highlights and summaries of our most recent newsletters with links to the PDF versions. You can find all our news and recent posts here.

9/5/20 – This is a Call To Conference NC NOW Newsletter which talks about our keynote speaker, new NOW President Christian Nunes, speaking on Voting Our Future NOW; a lawsuit challenging abortion restrictions in NC; special guest speaker Dr. Valerie A. Johnson from Shaw University speaking on Racial Injustice in the Justice System – for Women; a panel on how the Military #MeToo movement could help Fort Bragg and Fayetteville; and the registration/sp0nsorship form for the first virtual state conference we’ve held, which is on 10/10/20 over Zoom. Go directly to Fall NC NOW Call To Conference Newsletter.

12/4/19 – Pro-choice Signature Ad Appeal (2019). As the anniversary of the landmark Roe v. Wade Supreme Court decision approaches, it is important for us to take a stand and make a public statement in support of the rights it protects. We invite you to join us in signing our pro-choice signature ad. States around the country pushed abortion bans this year.

12/30/18 – Fall was a blur of #Kavanaugh protests, NC NOW PAC interviews and endorsements, and events. And then winter began, but with a cheerier outlook, thanks to the elections. Captured in the NCnRaleigh NOW newsletter Oct to Dec 2018.

8/7/18 – July/August newsletter with national conference summary, special session commentary and protests, #SaveRoe and #SaveScotus town halls. There was much inspiration at the national NOW conference in July in San Jose – highlights were meeting Women’s Rights Attorney Gloria Allred and hearing Nevada Senator Pat Spearman and others. Senator Spearman is credited with getting ERA passed in Nevada, and has spoken at ERA events in NC. Also includes an article written by NC NOW VP of Membership, Lori Bunton, about the impact of one more conservative #SCOTUS justice. NC NOW newsletter.Jul and Aug2018.v1

4/30/18 – NC NOW Newsletter for April-June 2018 V3. NC is in the midst of a primary election. NOW has Political Action Committees, PACs, at two levels—state and federal. Read about them here. We also cover some recent events (#EnoughIsEnough summit and UN-CSW convention) and show upcoming events around NC, like the Community Conversations in Fayetteville (next is May 15), protecting Food Assistance (SNAP) in Raleigh on May 8. Pro-choice signature ad delivery is Monday, June 4, at Legislative Building in Raleigh.

2/28/18 – NC NOW Newsletter for February and March 2018. NC NOW Newsletter for February and March, 2018. Big story – how Fayetteville people, including Fayetteville NOW VP, got law passed for NC to inventory their untested rape kits. This resulted in Attorney General Josh Stein and the Department of Justice coming up with great recommendations on addressing the 15, 160 untested rape kits. There are quotes and coverage from one of the women’s marches, “Trauma To Prison Pipeline Report” out of Charlotte. On page 5, you’ll find national events – about the Nifla v. Becerra case at the Supreme Court starting on 3/20/18 and an #EnoughIsEnough Summit in DC on 4/25/18.

11/20/17 – Pro-choice Signature Ad Appeal (2018). As the anniversary of the landmark Roe v. Wade Supreme Court decision approaches, it is important for us to take a stand and make a public statement in support of the rights it protects. We invite you to join us in signing our pro-choice signature ad. The war against women’s reproductive rights has escalated to unprecedented heights. Numerous bills to restrict abortion rights or to outlaw it entirely have been introduced in Congress in 2017.

NC NOW runs the Pro-choice Signature Ad every year in January to commemorate the Roe v. Wade decision that gave women the right to control their own reproductive choices. The pro-choice signature ad runs as the centerfold of Indy Week around the Roe anniversary (January 22), this year on January 24th, 2018. After the 2018 legislative session begins, we deliver copies of the ad with a letter to all of our representatives in the NC Senate and House to make sure they see it, and so they are reminded that there are many pro-choice people in NC.

A signature ad is effective because it demonstrates broad popular support for an issue. At the same time a signature ad tells those who want to undermine reproductive rights that there is strong and organized opposition to their position. We urge you to support choice and NC NOW by adding your name or by simply making a contribution if you do not want your name printed in the ad.

The September/October newsletter is a call to our annual NC NOW state conference in Fayetteville this year. Read about keynote speaker, NC Secretary of State Elaine Marshall, DeVos vows to revoke and replace campus sexual assault guidelines, and NC NOW at NC’s ERA Campaign as well. Find these articles and register for the conference at NC NOW Call To Conference Newsletter. 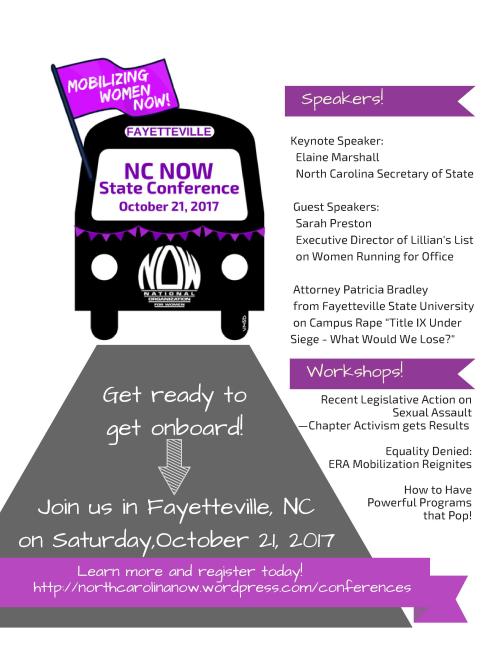 Read more about the conference at “You’ll be glad you joined us for NC NOW State Conference!” 9/21/17, northcarolinanow.org. You can sign up online, by mailing your registration, or at the door.

June and July were full of serious threats to healthcare via slashing or repealing ACA, both from Trump and Congress. 70% of adults on Medicaid are women. 75 million Americans depend on it. Read about how those bills target women more than you may know—on pg 4.

Read about other events in June & July and an action to take on pg 2. Feminist 5K was a great success. The Young Feminist Committee of Fay. NOW’s held first event, and second is planned for Sep. 2.

Take action on the outrageous attacks on the first woman to hold statewide executive office in NC, Elaine Marshall.

“Tuesdays with Tillis” highlight a different topic every week. NC NOW and others spoke on the devastation Trumpcare would cause on Jul 11. Senator Tillis’ office is reacting to continued protests—both on pg 2.

August 26 is Women’s Equality Day—read about it on pg 3. Learn other rights women don’t have at Equal Means Equal showings around state—both community showings and campus showings on pg 5.

5/20/17 – NC/Raleigh NOW newsletter for May and Jun 2017
Read about some of the NC Senate’s despicable actions, page 1. Read about what chapters around the state have been doing (page 2). Read why Science is a women’s issue in ‘Women in Science’ on page 3. See about the Feminist 5K on page 3 too. Read about a pro-rape representative from New Hampshire and problem with Trumpcare on page 4.  Read about ERA activities and about what really happened with HB2 in April on page 5.

3/5/17 – NC/Raleigh NOW Newsletter, March and April 2017
This description is from the President’s Voice section on the front page, telling you what is in the newsletter. Highlights: People have woken up in NC!

We had an unbelievable turnout at the Women’s March On Raleigh (WMOR) and in 12 other cities in NC!! The WMOR had estimates ranged from 17,000 to 40,000 people. Read about the WMOR on page 4.

1/20/17 – NC NOW Newsletter Jan/Feb 2017
Written before the Women’s Marches that occurred across NC (TWELVE across NC, last I heard!) and across the country, and around the world! Find it at Highlights:

11/16/16 – NC NOW Newsletter for Oct/Nov 2016
Rewritten after 2016 election. What do we do now? What we had been doing when we thought the world was sane. What’s coming up, including documentaries and events.

8/17/16 – Call to Conference for “Women Making History NOW” conference on Oct 1, 2016, in Raleigh NC. It’s the 50th anniversary of National Organization for Women! Celebrate NOW and important women on this exciting anniversary. The newsletter also includes National NOW PAC’s endorsement of Deborah Ross for US Senate. You all know that the NOW PAC endorsed Hillary Clinton for President at our national NOW conference in June 2015. Find the newsletter at NC NOW Newsletter Fall 2016.

6/16/16 – NCnRaleigh NOW newsletter May-July 2016 includes the continued damage from the law known as HB 2, why we had a second primary (we’re glad!), continued stonewalling of African American women for federal positions, teachers in the streets! Also includes how people can get involved. Note that chapter meetings are listed on front page.

4/9/16 – NCnRaleigh NOW newsletter Jan-Apr2016, showing NC NOW chapter events around the state, our upcoming ERA-NC Alliance event (4/12/16), NC NOW’s press release:HB 2 is Disastrous for Women (4/7/16), our “She Wins We Win” events in March, and some national observations, like on the passing of anti-abortion Supreme Court Justice Scalia, and the treatment of Melissa Harris-Perry by MSNBC.