Here are some pictures and media on #StopTheBans events around the state. For specifics like date, time and location on each event that was in May 2019, see Find a Stop Abortion Bans Protest Near You! 5/21/19

One source of coverage of the noon rallies around the state, including Winston-Salem, Greensboro, Charlotte: Spectrum News in NC Organizations Rally Against Abortion Bans, 5/21/19.

The reporter recognized that there were at least 9 #StopTheBans events planned around NC, which she got from NC NOW’s media advisory.

Charlotte NOW President Melba Evans posted on the Charlotte event. She wrote, “Great turnout for “Stop the Abortion Bans” protest today in uptown Charlotte. So proud of all the NOWCharlotte members who showed up, stood up and spoke up for women’s reproductive rights. Women must be trusted to make their own decisions about their life and their bodies. NOWCharlotte was a cosponsor of this event. #NOWCharlotte #TrustWomen

The Raleigh rally was set up first, I believe, and had its own theme, time and place. The theme was “Stand Up for Abortion Access” and it was held at A Woman’s Choice of Raleigh clinic on the evening of May 21, 2019. Most of the #stopthebans events were held at noon. This event featured speakers from prominent feminist organizations in NC – Gailya Paliga, president of NC NOW, Tara Romano, Executive Director of Naral Pro-Choice NC, Dani Hoffpauir, of Planned Parenthood South Atlantic, Kelsea McLain from A Woman’s Choice of Raleigh clinic, Becki Fernandez from Carolina Abortion Fund (CAF), Molly Rivera from ACLU-NC was speaker and emcee.

The event was held to explain the abortion bans, and discuss ways people can show public support for safe and legal abortion access and other reproductive healthcare for women.

Paula Wolf videoed the event with facebook live. NC NOW’s president, Gailya Paliga, is one of the speakers. If you’re on facebook, you can watch the speakers at https://www.facebook.com/paulaa.wolf/videos/10218511393719854/ 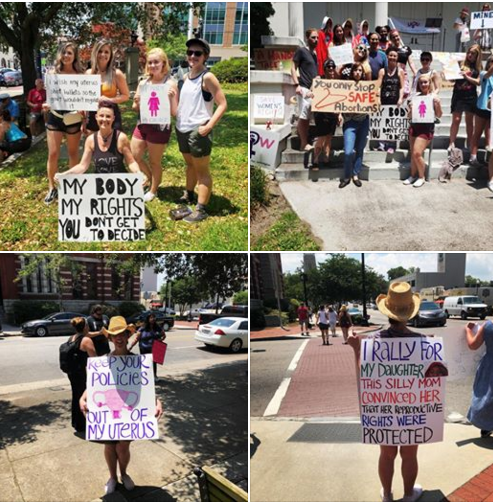 Women Organizing for Wilmington had 2 days of rallies – Monday, May 20, 2019 with their usual group, and Tuesday, May 21 with hundreds that came out for the #StopTheBans event.

“Pro-choice advocates across the country gathered at state capital buildings, town squares and courthouses across the country to oppose a wave of laws attempting to impose new restrictions on abortions. In the Piedmont Triad, #StoptheBans rallies were held in Winston-Salem and Greensboro.”

“Organizers of the rally in Winston-Salem say that they expected about 30 or 40 people to show up and were pleasantly surprised when about 100 people arrived.”

Lois Roewade and Triad NOW president Ana Tampanna, and past president Audrey Muck were all interviewed by WXII12.

Muck said, “The journey from conception to birth can be a perilous one. I think what we need to do is we need to focus on the person who is here now so you have a potential person, but you have a living, breathing person right here who has rights under the law and her rights need to be upheld.”

Muck also said, “They are not going to stop abortions. The only thing they’re going to is make abortion more dangerous for women. “

Asheville held their own event with their own theme the next day— “Protect Uterus Rights Rally.” Hundreds attended. Speakers included

2 thoughts on “#StopTheBans Event Summaries from Around NC – May 2019”